Every state, including the State of Washington, has a set of right-of-way laws which are crucial for protecting drivers, cyclists, pedestrians, and property. Despite these rules, failure to yield accidents occur across the nation every day. In fact, the Insurance Information Institute (III) states that failure to yield the right of way causes approximately 3,500 fatalities on U.S. roadways every year. There are so many fatalities connected to failure to yield accidents they actually account for 7% of all car accident deaths in the nation.

Every motorist has a responsibility and duty to ensure they’re following traffic rules—which includes failure to yield. Drivers have a duty to yield the right of way in order to keep the roads safe and to avoid possible collisions. Failure to perform this basic duty is seen as an act of negligence under Washington civil rules. If you have sustained a serious injury due to another driver, cyclists, or motorcyclists failing to yield the right of way, then it’s within your best interest to contact the legal team at PNW Trial Lawyers.

If you have been injured in a failure to yield accident, it’s crucial you gain legal representation as soon as possible with PNW Trial Lawyers. You could be entitled to a monetary award or settlement that reflects all your damages. That includes both economic and non-economic damages such as lost wages, medical expenses, pain and suffering, and loss of consortium. The experienced Washington failure to yield accident lawyers at PNW Trial Lawyers have years of experience assisting injured plaintiffs recover completely. They can negotiate with adjusters, collect evidence, file motions, and do whatever possible to fight for the compensation you deserve.

Schedule your first consultation with PNW Trial Lawyers by calling our office at (360) 483-5201 or simply submitting an online contact form. PNW Trial Lawyers has offices in Bellingham and accepts clients throughout the greater Whatcom County, Skagit County, and Snohomish County, Washington.

Washington, similar to every state in the U.S., has a set of laws that address right-of-way rules. According to RCW 46.61.190, the preferential right-of-way may be indicated in multiple ways including by stop or yield signs authorized under Section 47.36.110. The law states every driver approaching a stop sign shall stop, but if no sign is provided then the driver must yield the right of way to any vehicle in the intersection or approaching on another roadway at the point of the nearest intersecting roadway where the driver has a view of approaching traffic on the intersecting roadway before entering the roadway.

Drivers must do this if they consider the approaching vehicle to be an immediate hazard during the time they plan to move across or within the intersection or junction of roadways. In addition to what was said above, drivers must follow yield signs and slow down to a reasonable speed if they encounter one. They must then yield the right-of-way to any vehicle in the intersection or approaching on another roadway so closely as to constitute an immediate hazard when the driver is moving across or within an intersection or junction of roads.

Common Examples of Failure to Yield

Although the State of Washington has implemented failure to yield laws, many drivers fail to follow these rules and therefore end up in an accident. An individual can find themselves in a failure to yield accident in a multitude of ways including, but not limited to:

In every failure to yield accident, negligence is the main cause. Drivers must be attentive when operating their vehicles and failing to yield when appropriate is a direct violation of traffic rules. In some cases, a driver’s failure to yield is partly due to the at-fault party’s ignorance of Washington’s right-of-way laws. However, being ignorant of state traffic laws doesn’t mean the responsible party can’t be held legally responsible. It’s the duty of the driver to ensure they understand and follow all traffic rules to ensure the safety of other drivers.

Listed below are some common reasons why an individual may fail to yield on the road.

Liability in a Failure to Yield Accident

Those injured by drivers who failed to yield can file a claim and demand compensation in the form of a monetary award or settlement so they can recover completely. The plaintiff must go through the legal process and file a claim against the at-fault party, which they can choose to contest or default. If the defendant decides to contest against the demands, then the plaintiff will have to provide proof that the defendant’s negligent actions caused their injury.

In addition, the plaintiff must provide material facts that prove they experienced significant losses due to the injury, and the value of those damages. It’s important to note that the plaintiff may be held partially at fault per the Revised Code of Washington Section 4.33.005. The State of Washington has adopted the pure comparative negligence stance, which means multiple people can be held partly at fault. Essentially, multiple defendants and even the plaintiff themselves can carry some percentage of liability. The plaintiff must be at least less than 50% at fault if they wish to file legal action.

If the plaintiff successfully files their claim, then they’ll be presented with a settlement or monetary award. Some damages this award or settlement may cover include:

2020 Traffic Safety Annual Report by WTSC– Visit the official website for the Washington Safety Commission (WTSC) to review State traffic data over the year of 2020. Access the site to read their reports for crash data by county, city, crash factor, demographic, and more.

If you or someone you know has been injured by a negligent driver, contact PNW Trial Lawyers. There’s a possibility you’re eligible for a settlement or monetary award that will cover all your damages related to your injuries. That means funds for medical bills, car repairs, lost wages, and more. Recover completely today by calling the legal team at PNW Trial Lawyers. 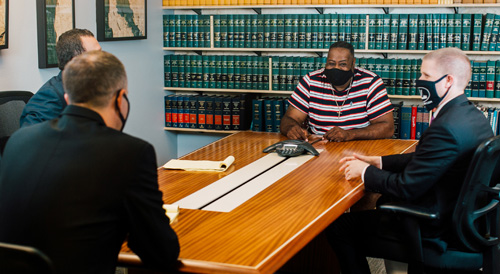